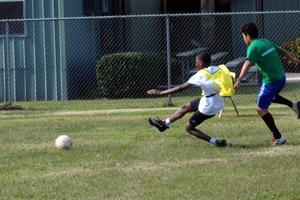 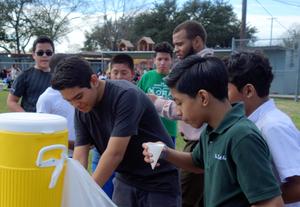 Soccer is gaining momentum at The Varnett Public School.
Launched last school year, the sport took several extra steps Thursday when the Southwest campus hosted a match against its Southeast counterparts. In the first game, Southwest defeated Southeast, 7-2. Game two ended in a 1-1 tie.
But, according to Mr. Lonnie Reynolds, Varnett's athletic director, the score was secondary. "I feel great," Mr. Reynolds said. "Even though Southwest won the game, it was a win-win situation because all of our kids got to compete."
Click here for more photos
At the Northeast campus today, with cheerleaders on both sides, Northeast defeated East campus 2-0. Before Thursday, soccer games were in-house.
Slated later this school year is 7-on-7 flag football, and Mr. Reynolds said track-and-field may be next.
In other activities, the Southwest campus on Saturday, Jan. 12, will host a chess tournament involving 19 schools and more than 100 participants throughout the city. "All of the elite schools will be competing,"  Mr. Reynolds said.
Extra-curricular activities at Varnett continue to flourish.
Published January 11, 2019 Print